If you have time for a movie
that will bring up visions of Flying Tiger 923, look into this one: Passengers (2008), with Anne Hathaway, Patrick Wilson, and David Morse (as the Pilot of the doomed aircraft).

I borrowed a DVD of the movie from my local library. It may be available at your library as well. If not, it is available through Amazon.com and perhaps through Netflixs. I am not trying to sell the movie, but I recommend it as a parallel to Flying Tiger 923. It captivated me enough to view it twice in the same night.

I have to admit that my experience with post traumatic stress and the painful struggle I had with what I called in my book, “The Secret of the Sinking Tiger,” drew me into the story line.

Briefly: a perfectly calm and normal passenger flight is shaken by an frightening engine fire on the right hand side of the aircraft, right out of Patrick Willson’s window seat. Chilling enough!

With very little time for preparation, the aircraft looses altitude and crashes on a sandy beach near the airport instead of on the water as it was intended.

After the plane crash, a young therapist, Claire (Anne Hathaway), is assigned by her mentor (Andre Braugher) to counsel the flight’s five survivors. When they share their recollections of the incident — which some say include an explosion that the airline claims never happened — Claire is intrigued by Eric (Patrick Wilson), the most secretive of the passengers.

Just as Claire’s professional relationship with Eric — despite her better judgment — blossoms into a romance, the survivors begin to disappear mysteriously, one by one. With the airline representative Arkin (David Morse) always in the shadows, she can see that many facts are being withheld, possibly to avoid the airline being held liable for the accident.

As she probes more deeply, Claire begins to suspect that passenger Eric may hold all of the answers. She becomes determined to uncover the truth, no matter the consequences. 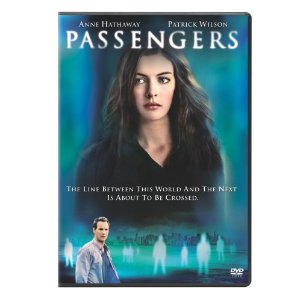 More information may be found at the Amazon website. Here is a link.

[FlyingTiger923.com Editor’s note: Another fascination I had with the film, aside from the plot, was with one of the “DVD extras” that showed how the engine fire and cabin scenes were filmed. Amazon.com is currently offering this DVD at a steeply discounted price.]

3 Responses to Movie parallels many aspects of Flying Tiger 923