Swiss Journalist Peter W. Frey has just sent us a photo of the actual Super Constellation – #N6923C – the one that met its fate  in September 1962, under the banner of Flying Tiger 923. Here is the photo and what he had to say about it in his email of this August 1, 2012:

“I at last found a picture of the actual Super Constellation involved in the ditching, registration N6923C!! it was taken in June 1961 on the tarmac of the old Gothenburg (Sweden) Torslanda airport. The photographer was Ragnar Domstad, then a junior at Chalmers Technical University in Gothenburg. He was the organizer of a charter flight to the US for his fellow students during the summer break at the university.  I have been in contact with Ragnar and the picture can be used freely – he does not claim any copyright.” 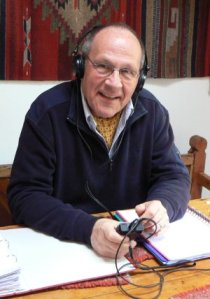 Peter Frey is presently working on a radio documentary series for the German language division of the Swiss National Public Radio system.

Frey is a Super Constellation enthusiast and is involved in a club that played a significant part in the restoration of the Breitling watch company aircraft.

For video of the Breitling Super Connie in flight (take off and landing), go to YouTube.com. This link will take you there directly:

You will find many short clips and experience the flight of what was once considered “Queen of the Atlantic.”

Survivor of the crash of Flying Tiger 923. at night, at sea, 500 miles off the west coast of Ireland, with 28 deaths and 48 survivors, September 23, 1962.
View all posts by Fred Caruso →
This entry was posted in Uncategorized and tagged Super Constellation. Bookmark the permalink.