Captain John D. Murray, 44, of Oyster Bay, Long Island, knew 76 lives were at stake as he slowly brought down the Super Constellation in preparation for ditching in the howling winds and raging waves of the cold north Atlantic.

He faced a dilemma as he searched his way through the darkness: he could follow the recommended ditching strategy of putting the plane down between the troughs, or take advantage of the 50-knot winds at sea level, which would cut his landing speed in half. His challenge was to get the plane down, either way, in the dark, in a gale, with 20 foot waves and with no power left to recover for a second attempt if he didn’t get it right the first time.

To the passengers inside the cabin, the crash felt as if the plane had made a classic belly-whopper.

It was a violent thud that broke open the hull and tore of a wing. In view of the conditions, the ditching was success, a combination of skill and miracle.

Reports of the ditching say the aircraft sank somewhere between two minutes and ten minutes, probably closer to the ten minute side.

Captain Murray hit his head on the control panel and was bleeding to the extent that he could hardly see. He made his way out and was most likely the last man out. He was very late getting to the raft. It was filled far beyond capacity. He was pulled in and he sat on the lap of a serviceman.

Evidently the crew was aware of a possible rescue ship, but thought it might be 12 hours off. An aircraft had been following the Flying Tiger right up to its contact with the waves. That aircraft, a US Air Force plane on its way from Prescott, Scotland to Nova Scotia had diverted in response to the SOS. Because it had been following so close, it knew the position of raft and soon began dropping flares to mark the location.

The raft had inflated upside-down, placing the emergency lighting along the upper rim deep into the water, making it useless. The emergency kit that contained first aid materials and a badly needed flashlight was out of reach as well. Those items were zipped in the raft’s emergency pouch which was now facing down into the water.

The raft drifted at a rapid clip for nearly six hours, covering about 22 miles in that time. Waves that seemed to glow in the dark splashed over the passengers, delivering a frigid chill every time.

Finally a rescue ship came into sight, the Celerina, a Swiss freighter. Due to the size of the waves, the recovery was handled with care. Rope ladders were thrown out to the raft and people began to cling to them. The crew pulled the ladders up with passengers clinging to them, taking them into safety. Captain Murray was again one of the last to get off the raft. When he had nearly reached the top, the ship pitched and he fell off, sinking into the dark waters along side of the raft. A trooper grabbed his life vest and pulled him back into the raft. He made it into the ship on his second try. 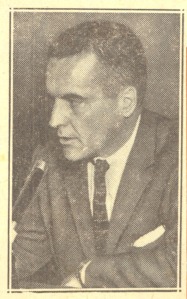 There have been many news stories about Captain Murray’s role in the recovery. The Saturday Evening Post ran a photo feature that included a sketching of the jam packed raft being tossed among the waves.

Fortunately for the survivors, Captain Murray was a flying pro! Had he not been, the outcome might have been far more disastrous.

Months after the crash, Captain Murray relocated his family from the states to Shannon, Ireland, where he continued to work for the Flying Tiger Lines. Tragically, he died some six years later in a scuba diving accident off the coast of Australia. We are seeking comments from those who had contact with Murray.

Survivor of the crash of Flying Tiger 923. at night, at sea, 500 miles off the west coast of Ireland, with 28 deaths and 48 survivors, September 23, 1962.
View all posts by Fred Caruso →
This entry was posted in flight crew and tagged Capt. Murray, Captain John Murray, crash of the Flying Tiger, Flight 923, Flying Tiger. Bookmark the permalink.

6 Responses to John Murray: Fate of 76 lives in Captain’s hands