Carol Ann Gould: Flight attendant on her day off

Carol Ann on the Celerina

Ann Gould. But the Flying Tiger Lines needed another flight attendant to accompany the 68 servicemen and their families to Frankfort, Germany. The appropriate officials of her department called Miss Gould’s mother, Mrs. Edward Ziegler, at 4:30 a.m. that Sunday morning.

I told them where she could be reached – at her girl friend’s house where she stayed for the night.” Mrs. Ziegler said. “If only I hadn’t given the number to the person who called, she probably would have been there.”

Miss Gould, 22, was one of the stewardesses aboard the Super Constellation (Flying Tiger 923) that ditched in the cold north Atlantic that Sunday night. It was a lucky thing for those 68 servicemen and their families. Maybe it was not so lucky for Carol Ann.

She started working for Flying Tigers in July of that year, having worked for five months for Frontier Air Lines in Phoenix, Arizona, and as a reservation clerk for Delta Airlines in New York. She was the only flight attendant who survived. 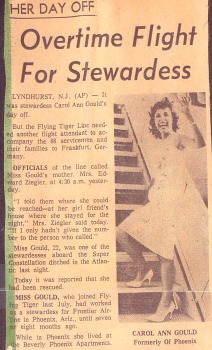 Story that ran in local news.

Carol Ann kept her cool as she coached and assisted passengers in their preparation for ditching, which came over those long hours before the crash. Toward the end, as she made her way along the aisle between the seats, she managed to forced a smile and whispered to the passengers, “Captain Murray is the best in the world; there is no need to worry.”

Pilot John Murray had 24 years of flying experience, and many hours in the Super Constellation, but — the stewardess did not point out – he’d never before ditched a plane.

At the end, she did not fasten her safety belt until the last possible moment. She and the other stewardess moved from passenger to passenger whispering, “Just sit tight,” and made sure that safety belts were secure and that passengers were in the proper crash-landing position. She did not know their altitude, or when the plane would hit the sea, but she went to the end of the aisle in the stern section and returned to her station only when she was certain her passengers had followed her orders to the letter. Then she finally took a seat and strapped herself in, to wait – like the others – for the end. Waiting . . . waiting . . . and waiting for impact.

After impact, she stayed inside the aircraft to make sure passengers were finding their way out. Finally she was “pushed out” by a soldier who could see there was no more hope. Outside, in the raging seas, she found her way to the lone, single life raft and was pulled in.

But that wasn’t the end for her. She spoke to as many as possible around her. She lead the group in songs. She spread all of the cheer she could muster and for many, it paid off.

Once aboard the rescue ship Celerina, she helped where ever she could and stayed with the remaining passengers until their arrival in Antwerp, Belgium. She gave up flying once safely home. Any wonder???

5 Responses to Carol Ann Gould: Flight attendant on her day off