DITCHING IN THE ATLANTIC

The successful ditching of US Airlines flight 1549 into the Hudson River reminded me of a much more difficult ditching that happened near Ireland in 1962. Whilst I don’t wish to take anything away from the terrific job done by Sully Sullenberger, the pilot of US 1549, he landed in daylight, close to shore, in calm water. The ditching I’m about to describe 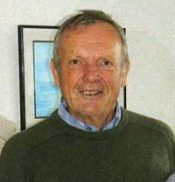 took place out in the Atlantic, at night, and with strong winds blowing.

On September 23rd 1962 I was standing on the ramp at Cork airport when the survivors of the ditching of flight 923 were landed by Royal Air Force helicopters. I still remember clearly my outrage at the performance of the press who had been allowed onto the ramp. A priest who was waiting to comfort the injured was rudely swept aside as the members of the press rushed towards the helicopters.

Flight 923 was a Lockheed 1049H Super Constellation, registration N6923C, belonging to Flying Tiger Airlines. The aircraft was en route from Gander to Frankfurt on an American military air transport service charter. The flight had originated at McGuire air force base in New Jersey and was carrying 70 passengers, mostly United States service personnel and 20 women and children from their families. In the cockpit were Captain John Murray, First Officer Robert Parker, Flight Engineer James Garrett and the navigator Sam Nicholson. There were four cabin crew looking after the passengers. The flight left Gander at 17:10 and was cleared to Frankfurt at 11,000 feet with an estimated flight time of 9 hours 20 minutes. At 19:35 the flight requested to climb to 13,000 feet due to light icing. At 19:50 the flight requested further climb to 21,000 feet as they were still experiencing icing.

Within minutes of levelling off at 21,000 feet the number three engine fire warning activated. The crew carried out the engine fire drill and shut down number three engine. The senior stewardess, Elizabeth Sims, reported that the fire was visible from the cabin. The flight then requested descent to 9,000 feet, the cruising altitude on three engines for their weight. After carrying out the emergency drill for an engine fire, which were memory items, the captain instructed the flight engineer to carry out the clean up items which are read from the emergency checklist. While doing this, the flight engineer inadvertently shut down number one engine, the propeller of which immediately started to overspeed. It should have been feathered before the fuel was shut off. The crew then applied max continuous power on engines two and four and started to descend slowly to 5,000 feet which was the maximum height on two engines. Number one engine would not restart despite numerous attempts to do so. Captain Murray considered diverting to Keflavic in Iceland but the weather there was bad with winds gusting up to 70mph. The flight continued on towards Shannon for another twenty minutes when the fire warning on number two engine activated but when the throttle was pulled back the fire warning stopped. It was now 21:15.

Captain Murray realised that he couldn’t maintain his altitude so he altered course towards weather ship Juliet which was about 200 miles off the Irish coast at 52 North 20 West. Within minutes the aircraft had descended to 3000 feet and was limping along at 150 knots when number two engine stopped. “Ladies and gentlemen it looks like we’re going to have to ditch,” Captain Murray announced over the public address system. By this time two other aircraft had been diverted to escort the crippled aircraft and had it in sight. The crew had already reviewed the ditching procedure in the flight manual and Elizabeth Sims had got the passengers to put on their lifejackets and had gone through the ditching procedure step-by-step.

Fred Caruso, one of the passengers, takes up the story: “WHAM!! More like WHOP!! We hit a mountain of water, belly first. My seat held fast but some broke off. The hull split open and a wing snapped off. Someone flew clear over my head. The sudden sensation of icy water on my stocking feet terrified me! Horror! Frigid, frightening horror!”

Fred escaped through the over-wing window exit. Fifty one people made it into the 25 man life raft and 48 survived, a miracle if ever there was one. Even though all five life rafts were recovered from the sea, the survivors only found one and this due to the heroism of the navigator Sam Nicholson. After Sam threw the only life raft that was inside the aircraft into the sea (the others were in the wings), the lanyard attaching it broke. Sam dived into the sea and managed to retrieve it

The night was a long, dramatic deliverance for those who lived. There were six frigid and dizzying hours in a tiny, over-crowded life raft that by fate had inflated upside down so the rescue lights were invisible from above. The wind blew the life raft some 22 miles from the point of impact to the point where the survivors were picked up by the Swiss freighter Celerina. Luckily a Canadian aircraft carrier, HMCS Bonaventure, was also in the area and used its helicopters to airlift the seriously injured from the Celerina to the carrier for treatment and later to a military hospital in England.

Caruso recalls: “The landscape! The seascape! The sunshine! The people! Even the roar and the rattle of the helicopter! They were all glorious that day, not just pretty or beautiful. It was breath-taking! Overwhelming! Glorious! My first view of Ireland! The weather broke when we got closer to land. The waters calmed and the sun came out. We had manoeuvred to the south of Ireland, some 16 miles southwest of Cork City, near the Galley Head. RAF helicopters evacuated 17 of us to the Mercy Hospital.

“How beautiful it was that day! The helicopter flew at about five hundred feet above the ground. That’s almost low enough to see the look on peoples’ faces. It seemed that the glorious green of the countryside extended out into the ocean, for at least half a mile, as if it were reaching out to greet us. That finger of water was emerald green. An Irish green welcoming carpet appeared. Beautiful!”

Probable Cause of Crash

The Civil Aeronautics Board found that “the probable cause of the accident was the failure of two of the aircraft’s four engines and the improper action of the flight engineer which disabled a third engine, thereby necessitating a ditching at sea. Under the circumstances of darkness, weather and high seas which prevailed in the North Atlantic at the time of the ditching the survival of 48 occupants of the aircraft was miraculous.” The report went on to say: “Apart from the major error by the flight engineer, there was a lack of proper crew training which led to confusion in regard to the position passengers should adopt before ditching and the fact that no final ‘brace yourselves’ instruction was given by the captain.”  They found “that the captain was not aware that there was a lever in the cockpit which would release some of the rafts installed in the wings. Another serious flaw in the preparations for ditching was the failure of the over-wing exit panels. Performance and testimony by surviving crew members indicated a lack or a low degree of proficiency having been gained from the training programme designed to meet emergencies such as were encountered by the flight.”

Despite the fact that the Flying Tiger manual and the US Coast Guard recommend ditching parallel to the swell, Captain Murray decided to ditch into the swell. This could easily have caused the immediate destruction of the aircraft. But Captain Murray decided that the interval between swells based on the latest forecasts would give him a better chance of carrying out the ditching successfully

The procedure he used was warned against in the Flying Tiger manual. The enquiry noted that the considerable impact caused by landing into the swell caused the wing to break off depriving the passengers of one life raft and also caused several rows of seats to fail. Despite this the board made no criticism of Captain Murray or any other members of the crew.

Captain Murray continued his flying career with Flying Tiger and was one of the first captains to be checked out on the new DC8 63 jets, an aircraft type I flew myself for several years. Seven years after he ditched in the Atlantic he was on a night stop on Wake Island, west of Honolulu, and was drowned while swimming in a calm sea. He was 51.

Fred Caruso was so delighted to survive that he changed his name to O’Caruso, became an Irish citizen, and bought a house in Glengarriff.

Editors notes: Charlie Coughlan’s career with Aer Lingus helped keep his interest in the Flying Tiger ditching. In fact, he has been a good friend of the Irish survivor effort since day one. He was on the ramp at the new Cork Airport at the time the 17 most seriously injured were being ferried from the ship Celerina by helicopter for medical treatment at

Cork hospitals. He says he was personally distressed with the dozens of news reporters on the tarmac who gave little room to the emergency caregivers as they attempted to tend to the injured.

Charlie became a pilot by beginning his pilot training as soon as possible. To the left he stands with one of his early instructors with their training aircraft. 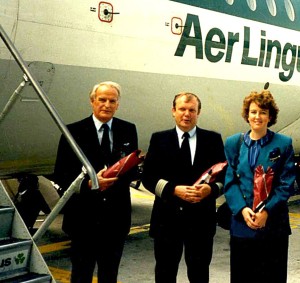 He says that Captain Murray became one of the early pilots to be checked out on the new DC8-63 jet that replaced the four engine piston driven trans-Atlantic passenger planes. Charlie checked out himself on the DC8-63 and spent the rest of his career flying jets for Aer Lingus. Shown here he stands with his parents, all holding a ceremonial bottle of wine at the inaugural flight of a new route.

As a career pilot, he carried his love of aircraft and his curiosity everywhere, including to the beach. His home is near the Galley Head light house on the Atlantic coast. He and a friend, Jane Melia, discovered on May 5, 2006, one of two vertical tail fins from an F-14 Tomcat, known then as the “Grim Reaper,” never seen in Europe. It had crashed off the coast of Florida some 4,900 miles east across the sea. The heavy tail fin had drifted along the Atlantic gyre to Long Strand near Galley Head. Shown here are that artifact where it had drifted up on the shore and the full length of the Grim Reaper.

engine on this aircraft blew up during a training mission off Florida on October 3rd 2002. The two crew ejected safely and were recovered. The tail fin must have separated

when the engine blew up and ended up floating over 4,900 miles to the Long Strand, taking 3½ years to do so. Unbelievable but true.”