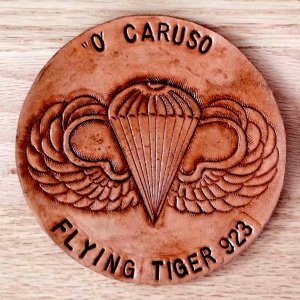 Paul Stewart of Fisco, Texas surprised three of his fellow survivors with beautiful mementos of Flying Tiger 923. They were in the form of round table coasters etched in leather.

The lucky recipients were former paratrooper Gordon Thornsberry of Russellville, Arkansas, former paratrooper Fred Caruso of Eagle, Colorado, and former Stewardess Carol Ann Gould Hansen, of Pequannock, New Jersey. Ms. Hansen was on the flight as a last minute replacement for a colleague who was not able to work as stewardess that day due to illness. The two paratroopers, Thornsberry and Caruso, were in the same Army parachute unit as Stewart, all stationed at Lee Barracks in Mainz, Germany.

The parachute wings are to specifically memorialize the airborne combat troops on board. Those troops comprised nearly half of all passengers on board.

When asked how he came up with the idea for the memento, Stewart said:

“Leather is a hobby, that I started years ago, and something that I really enjoy. Have only made things for family and friends. Started with belts, and when people saw them they wanted to buy, but as was working, and not having the time, I stopped doing leather craft for a while.

“I like to make things that are sort of one of a kind – even made some western gun holsters for friends.  Have never sold any of the items, and really never put any thought into any of that.

Stewart hand stamps everything, including the image of the parachute wings. Each parachute wing has been hand cut. No embossing dyes used, except for lettering.

When pressed about how much a set of coasters might cost, he reluctantly offered, “With parachute wings and lettering of “Flying Tiger 923”, $75 for a set of six, or $15 each for 1 to 5 coasters.”

[Editor’s note: I was one of the three recipients of the memento. I am getting a photo of my coaster (as seen above) printed on a porcelain coffee cup so I see it often. Has anyone else created a personalized memorial of Flying Tiger 923?]