By this point in time, most readers are aware that both the British and Canadian armed forces participated in the Flying Tiger search rescue operations. Few are aware to the extent of this participation.

Browmore Cliffs, Ireland resident Mike Flahive put that participation in the spotlight at a memorial ceremony on the Browmore Cliffs near Shannon, Ireland, last year on the date of the 50th anniversary of the crash, September 23, 2012. Some 80 local residents participated in the event that included the mounting of an engraved  monument secured in concrete in their honor.

Flahive reported at the memorial that two squadrons of British Shackleton aircraft and the Canadian aircraft carrier Bonaventure and its five escort ships, were being  honored and memorialized for their role in Flying Tiger 923 search and rescue operations. 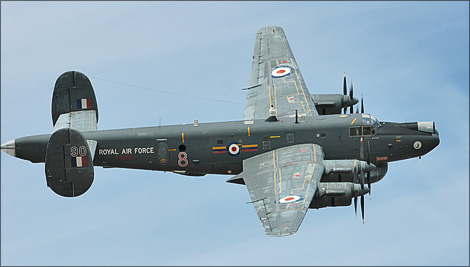 During the rescue operations, Shackleton aircraft scouted for survivors and dropped emergency survival kits across the search area in hopes that a survivor might make use of the medical supplies, food and water desalination kits contained in each package. One of the survival kits was discovered washed up on shore by Mike Flahive while he and his brother were on a beech-combing exercise.A total of 12 Shackletons participated in the search: seven Coastal Command Shackletons from St. Mawgan airbase took part, flying a total of l0l hours and 39 minutes. Five more Shackletons from Ballykelly, flew patrol for 64 hours and 45 minutes. Flight time for the 12 aircraft totalled 166 hours and 24 minutes.

When survivors were taken off the Swiss ship Celerina by helicopter, two days later, a Shackleton from Ballykelly flew an additional 15 hours and 4 minutes on guidance duties. Seventeen survivors were airlifted that day by two Royal Air Force Whirlwinds from the 22 Squadron detachment at Chivenor. They flew a total of 16 hours 35 minutes, shuttling survivors from the ship near Galley Head lighthouse to Cork Airport some 22 miles away where they were transferred by ambulance to area hospitals.

All these operations were controlled from the Southern Rescue Co-ordination Centre at Plymouth, England, manned by officers, airmen and airwomen of 19 Group headquarters.

The Canadian carrier, which is commanded by Captain Frederick C. Frewer, and was staffed by some 1,500 sailors. It was diverted to the rescue area the night of the crash and took three injured survivors, and one uninjured off the Celerina.

The Bonaventure’s involvement in the rescue ended on  September 27 when the ship arrived in the Shannon estuary. Its helicopters flew the four survivors and 12 recovered bodies to Shannon airport. On the return flight, they brought the Canadian High Commissioner to the United Kingdom, the Honorable George Drew. He thanked the ship’s company for their efforts. He also conveyed to the Bonaventure crew a personal telegram of congratulations from John Diefenbaker, the Prime Minister of Briton.

The US Air Force (USAF) also presented a plaque to acknowledge the ships immediate response and of their unselfish assistance to the American servicemen.

When the Bonaventure came on the scene at noon on September 24th, the aircraft carrier’s Principal Medical Officer (PMO) and a medical attendant were flown, via 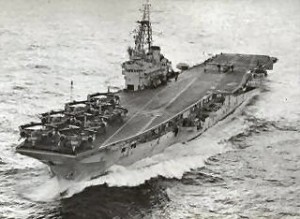 helicopter, to the Celerina to attend to the casualties. This occurred as the raging seas and high winds continued. Other flights were made over the next two days to move medical supplies and people back to the ship. Eventually, four survivors, including one woman, who required medical attention, were airlifted to the carrier. The Canadian helicopter Pedro transported 12 bodies recovered from the sea by other vessels. Of the 76 onboard the aircraft, 16 were never found.

The aircraft carrier Bonaventure was  seen by survivors and crew members of the Celerina due to the fact that it kept a safe distance from the Swiss freighter, eight miles away, for the several days of its participation.

See the related story, by clicking on this title: The Invisible Giant, The Bonaventure.

For details on the Browmore  Cliffs ceremony click this title: Browmore Cliffs Memorial.

Survivor of the crash of Flying Tiger 923. at night, at sea, 500 miles off the west coast of Ireland, with 28 deaths and 48 survivors, September 23, 1962.
View all posts by Fred Caruso →
This entry was posted in rescue teams, Uncategorized and tagged Bonaventure, Flahive, Flying Tiger, Mike Flahive, Shackleton, shackleton aircraft. Bookmark the permalink.