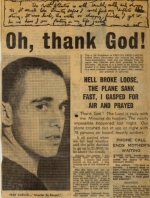 Some survivors wrote letters to describe the crash of Flying Tiger 923. One such letter was written the day following the disaster, September 24, 1962, while still at sea aboard the Swiss rescue ship, The  Celerina.

Pvt. Fred Caruso, newly graduated from combat paratrooper training, of Nanuet, N.Y., wanted to tell his family what happened to him and at the same time capture the emotion and feelings of the horror while still fresh in mind.

At age 21, he was one of the 17 injured survivors who were shuttled from The Celerina, then positioned only eight miles off the Irish coast at Galley Head, to the Cork Airport, some 30 miles east. He was on his way to Mercy Hospital.

Between the time it took to exit the bright yellow Royal Air Force helicopter and board one of the emergency ambulances, he was able to pass his hand-written letter to a news reporter for the British Daily Mail. He told the reporter he had permission to use any or all of the story if he promised to contact the Caruso family in New York to let them know their son was okay.

The reporter followed up on his promise with a phone call to New York. The story was published the following day, filling the entire front page of the paper. The photo in the news article to the left above was taken on the steps of Mercy Hospital, now part of the University College Cork (UCC) system.

The article appeared with one paragraph of the original handwriting and a headline that summarized the emotional aspect of the fight for survival, “Oh, thank God!”

The handwriting above reads: “The North Atlantic is cold. Terribly cold and choppy too. It seemed like eternity before I could find my inflate string. It was dark, the water so choppy, finally I got it. In one hiss I was floating in my life jacket.”

[The handwritten letter in its entirety can be found at the end of this article.]

Caruso spent the next three weeks in hospitals in Ireland, England and Germany, primarily for post traumatic issues, and moved on to his assignment with a combat unit in Mainz-Gonsenheim, Germany. He became involved in learning photography and writing articles about activities on his base, Lee Barracks. He was especially adept at writing about military maneuvers while continuing his parachute status.

Caruso eventually was recruited to be a reporter full time at the Stars and Stripes newspaper in Darmstadt, Germany, a position similar to that held by Flying Tiger 923 crash survivor/reporter Peter Foley. It was his story, “Oh, Thank God” that helped propel him into a career in journalism and the writing of his book, Born Again Irish, the journey that started with an airplane crash.

Survivor of the crash of Flying Tiger 923. at night, at sea, 500 miles off the west coast of Ireland, with 28 deaths and 48 survivors, September 23, 1962.
View all posts by Fred Caruso →
This entry was posted in new combat troopers and tagged Flying Tiger, Flying Tiger 923, Fred Caruso, liferaft, Nanuet, Nyack. Bookmark the permalink.