Two survivors, Frank Ruffalo and Sam Vasquez, reunited at my home in Arizona today (May 11). Would you like a photo of them? [Editor’s Note: “Yes, certainly!”] 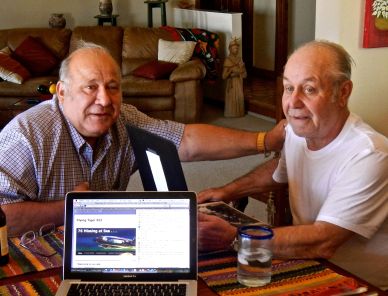 Ditching survivors Samuel Vasquez of Phoenix, left, and Frank Ruffalo of Chicago, right,  do some “catching up” after 52 years on May 11 in Arizona.

My name is Erik Stewart. My father is Paul Stewart. [see post of May 27, 2014] My brother and I have told him about the site. Please feel free to contact me if you would like to get a hold of my father. [Editor’s Note: “We have gotten in contact. I’ve looked for him for nearly three years. Thanks for the info Erik.”]

I was a crew member of the Bonaventure at the time. I was a flight deck electrician on the Bonnie. I remember the situation quite well. I think the highlight was watching our two rescue helicopters, namely Pedro and Fallen Angel transferring survivors and deceased from the Celerina to the Bonnie The pilots had to align themselves between the masts of the Celerina and adjusting their machines to match the heaving seas which were quite rough at the time. Quite feat to say the least. After treating the injured survivors, we sailed for Shannon, Ireland and transferred the survivors and deceased to the Shannon airport for transfer back to the United States.

It’s eery to read about 1962 in the context of the new cold war, troubles with Russia, a plane down at sea, etc.

RE Post: Robert Eldred: “The hand of God was at the controls of the plane.”
by Carol Hansen, surviving Stewardess

I remember Robert Elred and he is absolutely correct about Sam Nickolson. If it was not for Sam and God I would not be here today.

RE post: Melvin Baney: Just trying to do the right thing…
by Dianne (Hauntsman) Sperre

Melvin was my uncle, my mother Shirley, was Marjorie’s sister. I was only 2 when this tragedy occurred, so obviously I don’t remember any of the details. My mother and aunt Marjorie were very close, so my family spent a lot of time with the Baney family. I commend Joan and Jim for being so open in their narrative. In reading this article I got my first view of my uncle Red. Wow, Jim and Gene really look like him.

Dick Miskimen was a very good friend of mine in So Georgia, he and went to New Philly for Xmas and I met his Mother, brother and sister, I still pictures of that trip. I send Xmas card to Dick’s Mother until one Dick’s sister told me she had died, if Dot or Karen read this hope they will contact me. Mel

How wonderful (and absolutely amazing) that Karen (former Mrs. Miskimen) found the website. Coincidence? I think not. The Lord works in mysterious ways. Perhaps Richard guided her to it. I like to think so, anyway.

RE Post: Ditching of Flight 923 is an Atlantic ‘First’
by Henry Blake, Xenia, OH

I believe Karen nailed it. It’s amazing how anyone made it out alive from having to spend any time in such cold water. I filled a sink with water and added a few ice cubes to get the temp down to 40 degrees. My friend could only hold his hand in it for 5 minutes before pulling it out. I asked him if he thought he could swim in water that cold. He said, “Never”.

RE post: Skip Davidson: I knew it was swim or die.
by Sgt. Joseph C Whittington

I was at Fort Benning in Skip Davidson’s class and we all did not get orders to Germany. I went to
Fort Campbell, KY 101st ABN. I watched the Connie’s take off from Fort Benning and was sad not to be going to Germany.

Survivor of the crash of Flying Tiger 923. at night, at sea, 500 miles off the west coast of Ireland, with 28 deaths and 48 survivors, September 23, 1962.
View all posts by Fred Caruso →
This entry was posted in flight crew, new combat troopers, passengers and tagged Ruffolo, Stewart, survivors, Vasquez. Bookmark the permalink.