Pvt. Paul R. Stewart of Ardmore, Oklahoma, was one of the youngest paratroopers on board Flying Tiger 923 when it ditched in the frigid north Atlantic some 500 miles off the west coast of Ireland. It was a Sunday night, September 23, 1962. Stewart had enlisted within days of turning 17 years of age and had just graduated from parachute training at Ft. Benning, Georgia.

His mother, Mrs. Grace Stewart, got word early the following day, Monday morning, by telegram advising her that her son was in the crash and as yet was missing at sea and that rescue ships were on their way to pick up the bodies. 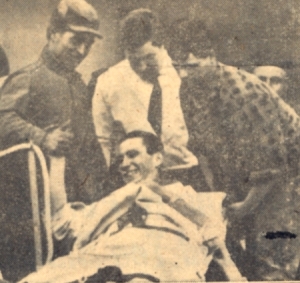 Paul Stewart grins as he is lifted off the rescue ship Celerina on a stretcher at the dock at Antwerp, Belgium. He suffered a deep cut on his right leg, which required a cast.

A reporter at the Daily Oklahoman news was the first to deliver the news late that same day that Paul was alive and on board the Swiss rescue ship, Celerina. Information on his condition was not then available.

Paul’s sister, Marguilla, answered the phone and when told her brother was rescued, broke down in tears of joy. His mother, Grace, said when called to the phone, according to the newspaper reporter, “Oh, it’s wonderful. I’ve worried and worried — ever since early this morning when we got the telegram.

“You don’t know how much I’ve … her voice trailed off.

Pvt. Steward suffered a deep cut on his left leg, but was not airlifted from the rescue freighter when it got close to Cork, Ireland. He remained on the Celerina until it arrived three days later at Antwerp, Belgium. He was taken off the ship on a stretcher, with his leg in a cast.

It didn’t take long for him to recover enough to continue to his assignment as a combat infantryman at Lee Barracks, in Gonsenheim, Germany (near Mainz). He served at that post for the next three years.

The writer of this blog story tried repeatedly to find he or his family, but unfortunately was unable to do so. The Stewarts of Ardmore 50 years later seemed not to be related and unable to lead to his whereabouts. The writer, Fred Caruso, and Paul were close associates at Lee Barracks, serving with the same unit, the 505th Airborne Infantry.

The information and notification scenario described above happened in a number of communities: tragic news of the crash delivered by telegram and joyful news by telephone from news reporters. The Army followed up with the good news by post some days later. None of the combat personnel reported their families having direct contact by Army officials delivering news or condolences in person.

Survivor of the crash of Flying Tiger 923. at night, at sea, 500 miles off the west coast of Ireland, with 28 deaths and 48 survivors, September 23, 1962.
View all posts by Fred Caruso →
This entry was posted in new combat troopers and tagged air crash, Ardmore Oklahoma, Flying Tiger, Flying Tiger 923, paratrooper, Paul Stewart. Bookmark the permalink.