Viewers Come From all Over the Globe

The website statistical monitor tracks all views by country of origin as well as the number so it is possible to determine from where the visitor interest is coming.

BUT, if one were to take the number of viewings as a measure of interest and weigh that against the country’s population relative to the population of the United States, Switzerland shows by far the highest level of public interest, with Ireland second and Sweden third.

Here is a breakdown of the top ten countries of origin, with the total population, number of views, the ratio of each country as compared to the US, and the number of views it might have if it were the same size as the US: 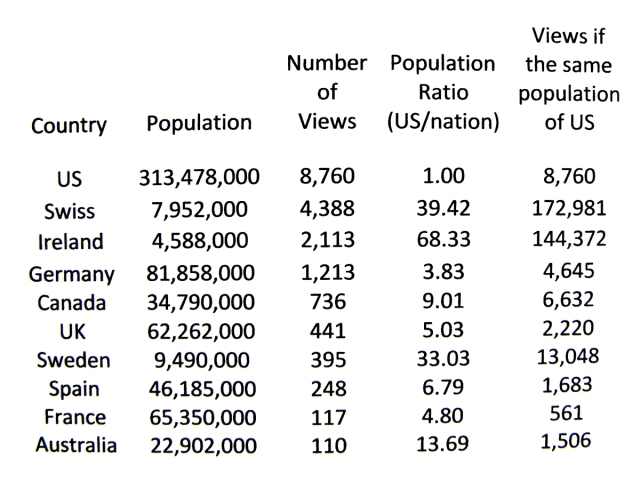 The extreme high level of public interest in Switzerland is due to several reasons. One is that the rescue ship, Celerina, belongs to a Swiss shipping company, Suisse-Atlantique. Many of the company’s employees present and past hold a great deal of pride in their country’s role in the rescue. The Celerina had a crew of 35 people at the time. Also, two Swiss National Public Radio reporters produced  separate radio documentaries on the Flying Tiger crash. One was a full hour in the German language and the other was 15 minutes in French, both aired during popular listener times.

Sweden’s high level of interest may be due to entirely different reasons. The Flying Tiger Line provided low-cost charter flight services to and from the U.S.  Our Flying Tiger 923 (#N6923C) was one of those aircraft engaged in 1961 by a travel group of college engineering students. The organizer of that group took a photo of the plane they used, Super Constellation #N6923. He passed the photo on to Swiss radio reporter Peter Frey, who passed it on to us. No doubt other travel groups that flew Flying Tiger checked in to see if they might have flown on that same aircraft. (Read the whole story. Click here.)

The apparent lower level of interest in the U.S. (relatively to population vs. views) can be accounted for by a number of reasons. Most important, there was very little publicity on the crash. There was a lot of global activity going on in late summer of 1962. Among those events were the Cuban Missile Crisis, the construction of “the death fence” between East and West Germany, and another military crash off the coast of Alaska that killed all 100+ aboard in the same week.

Survivor of the crash of Flying Tiger 923. at night, at sea, 500 miles off the west coast of Ireland, with 28 deaths and 48 survivors, September 23, 1962.
View all posts by Fred Caruso →
This entry was posted in Uncategorized and tagged air crash, aviation, Flying Tiger 923, Flying Tiger Line, national public radio, Super Constellation. Bookmark the permalink.

2 Responses to Viewers Come From all Over the Globe